April 14, 2010
Part 3 of my GTTOD series, part one is here, and part two here. This is the one where I get on my soapbox and ask for a favor...the favor will come later...it will be in obnoxious all caps and in a horribly bright color. But first let me tell you why I'm writing. 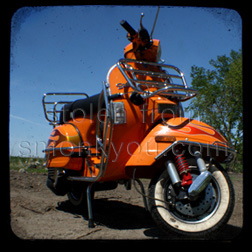 This is really about my mode of transportation to work now that it's getting nicer out. I'll be on my scooter a couple days a week...also I'll be biking around my hood more.

Which brings me to an article that inspired me to write this post. I saw a tweet from RoadID that linked to and article about a cyclist who was killed by a driver. I don't know the details of what happened, so I can't speak to it at all...but it's a tragic death.

But it does make me think a bit more as I get out on the road. That's because I see so many people not paying attention to what they are doing when they drive. You tend to notice it a bit while driving but I think you get a different point of view when on anything with 2 wheels. That's because you really need to be a defensive rider. I pretty much assume every car is trying to kill me. Also you can actually see into cars a bit more to see what folks are doing.

I've seen the cliche dude shaving, woman putting on make up and person brushing their teeth. I've also seen folks read the newspaper, one totally ingrained in a book and even a woman flipping through carpet samples while driving.

That stuff is just ridiculous, but the biggest thing that pisses me off is folks on phones. Which brings me to my plea, mostly for Twin Cities folk, but really for all.

STOP TALKING ON YOUR PHONES WHEN YOU DRIVE.

That includes bluetooth, through the car stereo and all that...it's been proven that it's the conversation, not holding the phone, that leads to distraction and therefore accidents.


Using a cell phone use while driving, whether it’s hand-held or hands-free, delays a driver's reactions as much as having a blood alcohol concentration at the legal limit of .08 percent. (Source: University of Utah via distracted.gov)

Mythbusters proved that talking on the phone is in fact more dangerous that driving under the influence. And I'm not even going to go into texting while driving because you'd have to live in a hole to not hear about how dangerous that is.

And here's the deal...I guarantee that the phone call that you're on when you drive will not save anyone's life, but there is a chance it can take someone's life. Yeah, some calls you'll get will be emergencies, like your kid spiking a fever (see yesterday's post) but I would bet that 99.44% of cell calls are not emergencies.

Plus I read somewhere recently that every time you talk on a phone while you drive an angel loses it's wings.

But seriously think about it, most of you are parents, know parents or even perhaps have parents. How horrible would it be if one of those parents was killed because of distracted driver. Killed because of something that is easily preventable. What if it's a child that is killed?

Sorry to get all gruesome but it needs to be said, and people need to change. This shit happens every day. Driving while on the phone is common place, I've done it. But it is so dangerous.

So please, please next time you're driving and you get a call think of your kids, or if you don't have them think of your family or your friends kids. Please don't pick up the phone. And if you really feel you need to please pull over to take the call.

Also please look out for folks on two wheels. The most dangerous times for a motorcyclist (and cyclsits) are when they are going straight and an car makes a left turn into them.

So, yeah...the post is a bit more sober than my usual posts...but I really want Miloh to grow up with a dad. I try my hardest to be safe while on the scoot (full face helmet and armored jacket) and on my bike (helmet) so now I'm hoping to cut down on the distracted drivers. One thing I suggest for any biker, cyclist, runner or really any (blank)-er is to get a Road ID or similar ID in case something does happen when you're on the road.

Thanks and Miloh would thank you if he could.
Also since I am a fan of bookends I figure I'll link out to a couple blogs I dig like I did in my first post of this trilogy. The first is The Lame Sauce by Greg, he's a dad and a cyclist. The second is Bike Snob NYC, he's a cyclist that is sarcastic and critical like me...he takes on some of the absurdity of cycling including the asses that don't seem to care about the rules of the road...good stuff.

And to ramble a bit more and beat a dead horse, Greg from The Lame Sauce just sent me a link to a post he did on his other blog District Cycling. It also talks of the dangers of cycling and cars. I think it's a good and important read.