Observations: I'm getting all Montessori 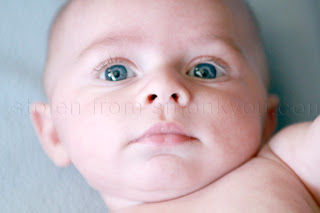 One of the things I learned from Staci about the Montessori way is you should observe the child. And I've been doing that...not because of the Montessori thing really but because I'm kind of fascinated by baby's brains.

Here's a few of the things I've noticed, I'm sure all kids do these things but I'm having fun watching them happen.

He's starting to put things in his mouth. He's been grasping for a little bit and now he decided he's bored with that. So when he grabs something he starts to bring it to his mouth. The thing is that his hand eye coordination is not exactly where it will eventualy be...he's about 1 or 2 inches off. It's kind of cute. Depending on the thing it goes to his eye or cheek. Then, if it's the right thing, he'll get it into his mouth. He can get this Manhattan Toy teether

in is mouth every time. But it's the Manhattan Toy Skwish

that screws him up a bit...too much going on.

He loves the mirror...I guess most kids do. What's really interesting to me is he seems to get it. I think I heard long ago that babies don't realize it's them until a certain age (if anyone has that info I'd love to have it.) We have a bell hanging in front of the mirror. He lays under it and rings it by hitting it with his hands. Like I said he's sometimes an inch or 2 off and he misses. But what really is cool, and what I mean by 'he gets it' that when he's looking at the mirror he is able to get the bell almost ever time. It's either pure luck or he is understanding what's going on with the mirror...it's cool to watch.

He loves sleeping on his left side...he'll get all fussy until he rolls to that side. This is how he goes to sleep. Once asleep if he rolls on his back he'll be fine, but he won't really crash at night until he gets on his side.

He really thinks it's hilarious when he farts in my face. Well he's only done it once. I was smelling to see if he had a dirty diaper, something I thought I'd never do, and he farted on me. It made him giggle and smile like crazy. He was the only one that thought it was funny.

He used to get fussy after a long period of tummy time...but that no longer happens. Now it's tough keeping him on his belly. He's like a weeble wobble...every time we put him on his tummy he flips right to his back...he's come a long way form his first roll.

Miloh's also crazy observant...he looks around at everyone and everything...this includes the TV. And we don't want him to become the TV junky I am, I work better with a TV on than without. So we're a lot more conscious about when the TV is on...which I guess is good because we DVR more and watch less pure crap.

Also he loves books and such. Whenever we read to him he really checks out the pictures, one of the interesting things I've noticed is that he more often looks from the right to left, which makes me think if all kids do this. And if they do, which I don't know, is it an innate trait? Because some older languages like Hebrew and Arabic are read that way.

One of the books he's loving is Baby Read Patterns

. It's a bunch of black and white patterns. Again I have dorky observations about this. He really prefers patterns with circles and patterns that are organic vs symmetrical. Other things he's digging include Warhol and Shepard Fairey's Obey stuff

(the bright color prints not his collages...also I realize most is not for kids.)

So, yeah maybe I'm over analyzing things, but the inner arm-chair psychologist in my is geeking out on his goings ons. I'll probably have more of these things later as I'm really digging watching him do his thing.