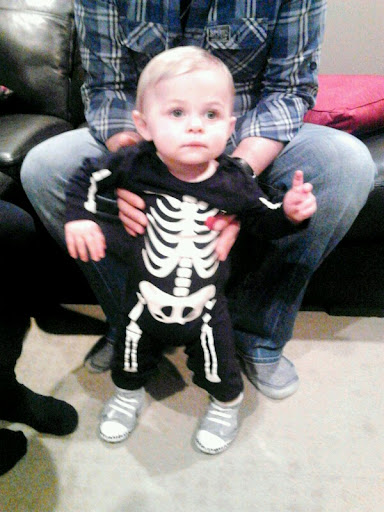 In my last post I wrote about how what I thought would be a love of handing out candy to trick-or-treaters was squashed the second I realized it involved talking to kids I don't know.

I thought I'd recall a couple events from yesterday to show how my wife rocks at trick-or-treat and how 8 can use some work.

We were at some friend's house when kids came by wanting some goodies. Staci answered the door and saw a kid dressed as Waldo and said something like. "Oh, there you are. I've been looking for Waldo for a long time and now you're right in front of me."

She said it in a different way but she was on.

Here was my one interaction with a kid...we got home later so trick-or-treating was ending.

I took our dog to pee while Staci put Miloh to sleep. There was a kid with her mom outside. As she got in front of my house I said, "I can give you candy if you don't ring the door bell. My kid's asleep." Pretty elegant don't you think...and it keeps all the magic of the holiday.

Then when I got inside I ripped open the bag of candy and gave some to the girl. She asked if I knew what she was dressed as.

She had a pink costume, semi plush and padded, with sparkles on it. I guessed princess...I wasn't sure why it was padded but I thought I had a 50/50 shot with that.

I was wrong. That's when I noticed the gloves hanging from her hands...I guessed dinosaur. She looked at me like I was a fool. Her mom told her to show me her hood. She turned around and there was a horn. She said "I'm a unicorn silly."

I said goodbye, closed the door and said, "read my freaking blog kid." And that's why I don't like dealing with trick-or-treaters.

P.S. I was dosed with cheese. At said friends house I took a piece of what appeared to be a bread with onion or garlic baked in. Apparently it was garlic and cheese. I noticed on the first bite and spit it out in my mouth...because I'm classy like that.

I survived both incidents but I'm scared by the horror of the night.