Megabolt: One for one sketchbook

April 04, 2011
I am in the process of adding a tab on my blog called PR unfriendly... because really I am. I get many emails on complete crap that people want me to promote... and for free.

But then once in awhile I happen upon something that's just really cool so I share it here.

Enter Megabolt. While perusing OMG Posters I saw a post about a sketchbook for a great cause. Megabolt is like the Toms shoes of sketchbooks... except they aren't completely ugly. I mean let's be honest... Toms shoes for guys are horrendous...or fantastic if you're a hippy. 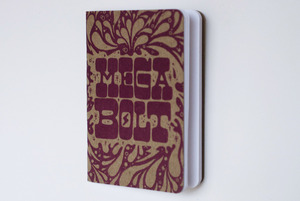 You can get the down low for Megabolt here or you can enjoy my short little synopsis that I plagiarized* from their site (or you can do both). *It's plagiarism for a good cause.

Megabolt or The Bolt as I will now refer to them, since it feels weird to keep typing Megabolt, was started in 2009 to when a dude's friend's dad passed away from brain cancer and he needed help with the hospital bills. They raised some cash and after the bills were paid found that folks still wanted to help.

The Bolt shifted focus and started to raise money for kids in the hospital. They use art to help empower kids to keep fighting their illness.

Now here's where some real awesomeness comes in. The Bolt is selling sketchbooks for $7 or three for $17. For each book you purchase they will give one to a kid in a hospital. Cool right... But like a Ginsu  commercial that's not all.

Each book is hand numbered and with that number you will be able to go onto Megabolt.org and find out who the other book went to.

Once a child is done with the book The Bolt is going to archive them digitally so you'll be able to flip through them online.

They do say that not all the books will be online... and with all the HIPAA laws I totally understand that. But still the project is great. And rumor is they will have different artist series covers in the future.

So buy one... for shipping it's just under $10 and three are $20.50 with shipping. That's basically less than you spend on your skim, decaf, sugar-free vanilla latte (or as we used to call them - a sorority girl).

And since you're all in the "I want to do something good" frame of mind here's something else to check out.

I while ago I mentioned a baby girl named Getty who has SMA. Getty's parents started a non-profit to help other families of kids with SMA.

Then Alex and Angela Dezen of the band the Damnwells heard Getty's story and created a great Lullaby CD. It goes on sale Tuesday the 5th and they are trying to get it to rank in kids music on iTunes.

So if you want to buy some great lullabies, that you actually would want to listen to yourself, and help a good cause out check them out. Here'st the iTunes link... or you can head here to get non-itunes mp3s and more info.