April 07, 2011
Monday was Miloh's first day of school... He started in the toddler community at Staci's school. Actually it was only the first day of phase in week so he'd only be there an hour... but still.

And yeah he's kind of young for school, but the toddler community in Montessori is made for kids his age.

You may remember that before Miloh was born I was thinking about what a good dad is... in that post I decided I'd make waffles as a nice comfort food for our kid (we had no idea what kind we'd be having). So I decided it would be nice way to start Miloh's first day of school.

After breakfast we got Miloh ready to head out. We told him he would be going to school. He's familiar with the school and his new room. He actually loves the environment, it's really beautiful. He took some infant classes there, and his teacher was the first person not related to us (or not a hospital worker) that saw him so they have a great bond.

So we think he kind of understood. We got him dressed and then headed to school.

Once we got there he was super cute. He must have known he wasn't there for just a visit because he hesitated going in.

He grabbed on to me super tight then tried to jump from my arms to Staci's. He was feeling first day jitters and a bit of separation anxiety. We set him down for a second to get the classic first day photo of him holding his little bag.

Afterward we explained to him that he'd love his class and his teacher who he already likes. And then we got him in the door.

But that was the door to the school not his classroom. Once we got to the room door it all started again. He jumped into Staci's arms and said "mama" for the first time. Then he started balling because he already missed us.

We got him in the classroom and said our goodbyes. He ran to the door and started crying but the teacher calmed him down.

It's sad to hear him cry for us but there's also something really great about knowing that he'd miss us.

I guess that's how most first days go down... the only problem is his was nothing like that... Sorry.

He had breakfast... Oatmeal. It's really too early on a weekday morning to do homemade waffles.

Then we got him ready for school and Staci headed to work (same place).

When it was time to go I strapped him in the car and headed out with a camera, flash and some props (his bag which he wouldn't need since he'd only be there for an hour and his monkey lunch box because it makes for a cute shot).

When I got to school we went to the door and I gave him the bag so I could get a cool photo. He immediately dropped the bag and started pounding on the door to get in to the school... I told you he loves it there.

There was no way I was getting him to turn around for a shot...

Then we went in to the school and I handed him his bag again. This time he held it then went to his classroom door and started trying to open it. As I kept calling his name so I could get him to look in order to take a photo he would glance, if I was lucky, and then try to get the door open.

I was able to get one shot off... Literally one... And it sucks (although he's rocking some Donald Trump hair). 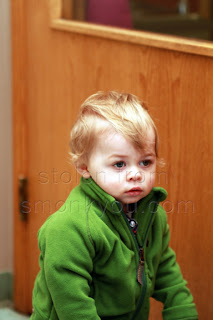 Then when we got him into the class he headed straight to the fish tank. I tried to get his attention, again for a shot and I thank his teacher (who he does have a great bond with) for humoring me, but he could care less about me. Staci poked her head in but she got the same cold shoulder.

First day of school... No separation anxiety... No crying... No saying Mama (or Dada which he used to say but has decided to forget)... And he pretty much forgot about us the second he arrived.

All in all it was a success.