A bit of a scare but a lot of learning

December 02, 2009
2:00 A.M. Sunday morning Staci woke me up because she had some pains in her bellyish area/ribs. I comforted, cuddled her and took care of her in every way possible.

Okay let's start this over a bit. I am not a morning person...at all. I can go to sleep whenever but I can't wake up early. And when I'm woken up I'm not happy...I don't talk...if under duress I will only grunt or spit out short sentences. That's why we have a plan that once the little dude/dudette is born I will be taking care of it late night. So here is how it actually went down.

Staci told me she was having some pains...I said something like "yeah?" and went back to sleep. About a half hour later she told me she was still having pains...I told her they were Braxton-Hicks....and went back to sleep. About 15 minutes later she was writhing in pain...I asked if she wanted to go to the hospital...and told her it was probably Braxton-Hicks. She went down stairs and grabbed her coat. I took the dog to pee since we weren't sure how long we'd be gone.

Then I went to grab my keys..they were MIA...no biggy because she has keys. Then I went to find my money clip...it's where I hold my credit cards, if there is ever cash in it I keep the big bills on the outside...and those would be singles.  Couldn't find my clip...Staci had her cards so we didn't need mine. But I have a really big thing on leaving without ID and credit cards...so I'm running up and down the stairs looking for my money clip and some good luck...I found my keys. Then one more trip upstairs and I found my money clip.

Oh...this just in..we have a guest blogger...Staci is going to tell the story in her words.

I woke up in the middle of the night, about 3 in the morning, with soreness and stabbing pain. Sat up, went to the bathroom because that is what I do about every 20 minutes now adays...the pain was horrible.  I woke Kenny up, said "Kenny I'm in a lot of pain." He said "oh" and went back to sleep. I sat up again to see if it would go away and told him I was hurting, he said "Braxton-Hicks...its Braxton-Hicks"

I went downstairs to the couch while Kenny slept. The pain got even worse.  It just didn't feel right. I decided to call the on call OB.  I explained what was going on and she told me to go to the ER.  They said it sounded like my gall bladder or preterm labor.

I yelled up to Kenny who was still sleeping (soundly) and said...we need to go to the ER.  I was pretty much ready.  I grabbed my shoes, purse and waited for Kenny.  All I heard was..."where is my wallet" "have you seen my keys?" "should I take out the dog".  From the couch I yelled to him, "take out the dog in case we don't get back in a few hours, I have keys and my purse - lets just go..."

Then I heard Kenny brushing his teeth (which takes forever).  I thought this must be a joke.  Then he seemed to be muddling through the laundry saying something about his wallet and asking me if I have seen his money clip.  Then he asked me what jeans he wore last night (because maybe the wallet was in there)...meanwhile,  I was on the couch in terrible pain just waiting.  I reminded him that I had everything we needed and I had to get to the ER.

After about 10 minutes Kenny came running down the stairs.  He still muttered something about having to put on his shoes, find his keys and take out the dog...time passed and I just sat there watching him run around looking for his things, trying to get the dog ready (which is quite simple), etc.  It was actually comical.

Finally after about 20 minutes, I got up off the couch and went to the car.  He eventually got his stuff together and we headed to the hospital.

It may have happened a bit more like her story but there is no way to tell for sure.

Any way, now we're at the  hospital. She was admitted to the ward that she'll give birth in so it was good to see it. Her doctor wasn't on call but they all work closely together so she was in good hands.

Since they had originally thought gall bladder, I guess it can go wacky when pregnant, she got an ultrasound for that and it wasn't the problem. So they hooked her up to a heartbeat monitor for the pre-kid and a contraction monitor. Then doctor after doctor came in and tried to figure out what was going on with her. It was kind of like an episode of House...pretty cool from my side because I geek out on science...Staci wasn't loving it.

Well after 12 hours they figured she was having contractions...but it wasn't really like pre-term labor because the was no dilation and the baby wasn't ready. Did you know there is some fluid they can test for that if present means the baby will be born in 2 weeks? Well there is and that wasn't present...but here's the deal...how did they figure that out? Did they test people every week of pregnancy for every fluid and such? Probably...and the first person to figure it out was amazing...that's why I love science.

That episode was a bit scary, but she's better now after a couple days rest. Not great, but good.

Here's one of the things I learned because of this trial run. I have some suggestions on goodies to pack in the hospital bag...things that you may not think of. So here are some additions for your bag:

A camera – I know you're probably thinking of bringing a camera...but let's say you/your wife/friend (depending on reader) is in labor. You will grab her overnight bag but will you remember the camera? Maybe not. I forgot mine and what would have happened if she was early? So put the camera in the bag now. Only have one camera? Get another...that's what the 2nd Amendment is all about...people think that they mean guns when they say arms...they mean cameras and lenses and it's the 2nd Amendment because to stress the need for a second camera...that's a fact.

You need extra batteries for the camera...if it takes proprietary batteries buy at least one extra...you will be bummed if you run out.

Toothbrushes – In case you aren't able to brush your teeth on the way out. One for each of you...and toothpaste is a good thing too.

Phone cords – get extras if you can...put them in the bag now...you'll want your phone to work.

Some snacks – the preggo one will get food at the hospital and probably won't be able to eat outside stuff...the non-pregnant one can eat whatever they want. I hate hospital food, and I am not a fan of vending machine food so I'm gonna bring snacks. If you like hummus check out the Sabra's hummus cups to go with flat pretzels. Not the best hummus in the world, but good and super easy to transport...I'm gonna make sure I have some on hand for the next couple months.

Miscellaneous – something that will make your wife smile...because if the rumors are true labor isn't super fun. I packed a fake apple. When we move to our new house Staci bought 5 fake apples for the table...I'm not sure if they ever actually went out. She hated them soon after bringing them home. Every so often I'd put one under her pillow...she hated it but it made her laugh. Then one day she threw them out...but I found them. So I wrote notes on all of them and stuck them all over the house when I was out for a week long business trip. Only one is left but I break it out every once in a while...that's what I brought. She smiled. 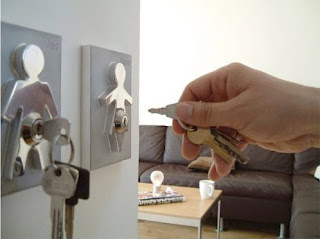 And last...keep your keys and credit cards, IDs and med cards handy...we use these Key Holders

The moral of the story is I've been banned from saying Braxton-Hicks.