Gear Thursday: my thoughts on cameras (and video recorders)

December 03, 2009
With the holidays coming up a lot of friends have been asking my opinion on what camera to get because they are looking to upgrade. Most questions are what's coming up? What looks good? And what's the best for them? I try to stay current but I admit I'm a bit behind since I bought my last camera a few months ago.

I'd love to do a post about what would be a great camera for all my readers...but since you all have different needs that would be tough. Plus there are dedicated sites out there that rock...I'll get to them later.

There are a couple of things I always look for when searching cameras..I'll share that info here. This is high level so you can use this as just a starter guide. I won't really get into what is the best.

A lot of folks look at megapixels and think that more is better...this isn't always true. Yes 10 is better than 6.  If you're never print over 10x6 you'd be fine with 6MP, however what if you get an amazing shot? You'll be bummed you can't print larger. Design 215 has a good guide on printing sizes of different MPs.

However if you go above 10MP on a consumer camera you start degrading image quality because there are too many lenses on a small sensor. 12MP is okay...more than that is a waste...actually not a waste, it's bad. One exception is the Canon 7D DSLR...they figured out a new way to arrange 18MP on a small sensor and keep image quality. I just bought one and it's awesome...highly recommended if you want to drop the cash.

Another thing I look for are batteries. With a point and shoot camera I want AA batteries. The reason I like AAs is because you can get them anywhere. If I'm traveling and I run out of batteries I can go into any store and grab batteries. Plus AA rechargeables are super cheap compared to proprietary camera batteries.

Sadly it's getting harder to find cameras that take AAs one reason is it makes for a large camera and everyone wants a camera that can fit in their jeans. Also the camera manufacturers make a lot on batteries.

Years ago I got a great Fujifilm camera that is 9MP, shoots raw and uses AAs. Sadly they killed that line of cameras. There is one really nice Canon point and shoot that uses AAs. The PowerShot Sx20 IS. It also has image stabilization, takes HD movies and has 20x optical zoom. It is 12MP but has received some good reviews on image quality. It's not super cheap at $370 but it is really nice.

If you do go with a camera that has proprietary batteries you should get at least one extra, if not two...how much would it suck to be without batteries when your kid is being cute?

Another Canon I'm eyeing is the Canon PowerShot G11

as their walking around camera. What I love about the G11 is Canon downgraded the megapixel from the 15MP G10 to make this 10MP...the really worked on image quality and realized that is more important than the pixel war. Both of these cameras allow for an external flash so you're getting close to DSLR image quality and control with a lot less cost.

Before I got my Canon 7D

which takes awesome HD video, we purchased a mini video recorder. It won't go to waste because it's pocketable while the 7D is not. 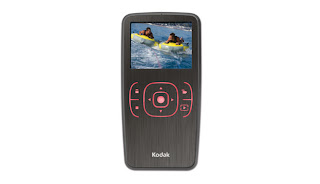 The most popular of these style camcorders are the Flips. I went for the Kodak Zx1

for a couple reasons. In reviews it got better grades than the Flips for image quality. Plus it uses memory cards while the Flip has built in memory. Again let's say you're out and your kid is being super cute, you want to take some video and you hit the built in memory limit...and like most people haven't downloaded in a bit...you're screwed. With memory cards you can buy a lot of back ups as they are super cheap...but you need to keep them on you. Plus the Zx1 uses AAs and you already heard my thoughts on that. Kodak just launched a new camcorder on their other line. It's called the Zi8

. It uses memory cards but not AAs.

So those are some of my thoughts. I hope it helps if you are trying to make a decision buying a camera or video recorder.