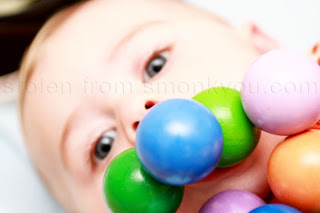 Miloh gets it...he's really starting to figure out the world, how to play in it and how to manipulate it.

He's figured out that we're not fans of when he cries...he tries to use that to his advantage. One night when putting Miloh to bed his pacifier fell out right away and he started crying. We aren't ones to put it back in every time it drops but since it was right away I placed it in. He calmed himself, took it out, looked at me and started crying.

I thought it was just coincidence that he looked at me beforehand...but then I put the pacifier back into his mouth...he did the same thing. He looked straight at me, took out the pacifier and started crying...I knew what was up and left the room...he stopped crying after a minute.

He's also crawling like a madman...he was rolling with purpose for a bit...he'd see something turn and roll to it. Now he crawls like crazy...and with purpose.

He and Kalli, or dog, flank our cat Zoggs and attack him from the sides. This happens often...Miloh is  a bit too slow to get to Zoggs on his own. It's weird how Kalli and him team up like this.

He figured how to get his diapers off...if he's in a disposable and he isn't immediately shoved into pants we're screwed...diaper is off.

Even with some of the cloth diapers he can get the velcro off...he hasn't figured out buttons so we're good with Fuzzi Bunz.

And he's a bit cocky. People come up to him and say he's cute...he then looks at them and raises one eyebrow...I can't freaking raise one eyebrow. Then he acts coy and puts his foot in his mouth.

It's really weird to see a super young kid with such a personality...I guess this is normal but if you're been reading from the start you know a) before Miloh I've barely been around babies and b) kids freak me out.