Miloh the 15th or In Your Face Morgan Freeman

March 20, 2011
If you've read my blog for over a year you'd now about my Ides of March ritual. If you haven't been reading that long I really need to ask what took so long? I mean seriously. Did you know that more people wake up to my blog each day than wake up to the Today Show, Good Morning America and The Cat in the Hat Knows A Lot About That combined?

The short story is I don't work on the Ides of March and I've decided that I'll spend the day with Miloh each year until he goes to college and then celebrates it on his own but only because he's celebrating not having to hang with me. 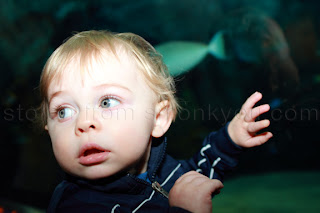 This year we went to the Aquarium at the Mall of America. In case you can't do the math, don't know the days of the week or just don't really care that much I'll remind you that the 15th was a Tuesday this year. And apparently that means Toddler Tuesday at MOA.

They call it Toddler Tuesday because there are events and such for the kids... I however prefer to call it Never Step Foot In That Mall on a Tuesday.

Why you ask? Because that place is packed with people, most of them toddling.

I guess it's good for people that take care of their kids every day because it's probably a good break... but had I known I would have skipped it because a free kid's quesadilla at Chipotle isn't worth the long lines, the crappy parking and the billions of people.

Still it was a good day for Miloh and I. He got to go the the aquarium again and he loves it there.

Sure his attention span was a bit short but the sense of wonder he had as sharks and sea turtles passed over him was priceless... So, take that Morgan Freeman for wondering when the last time I took my kid the the aquarium on a Tuesday afternoon... it was last week. And you're welcome readers for alluding to two competing (and old) credit card campaigns in one paragraph. 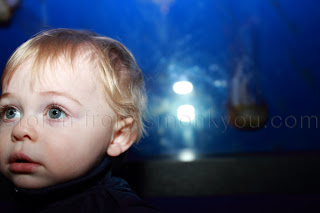 Also I'd like to take this time to mention that sea turtles are huge. Five divers were corralling one into the back while we were there... it was as long as the divers so unless they were super small people the sea turtles were much larger than I thought.