February 20, 2010
There was a big change that happened in Miloh a week ago. He used to be a total angel when he went to sleep. Yeah he'd wake every 2.5 hours to eat, but he wouldn't fuss much.

Then starting last Sunday he got really fussy...super-crazy fussy. And the thing is it affects me a lot because it's at the times that I'm watching him at night when he is at his worst.

Well this Friday night I shared my experience on twitter...so I thought I'd share it with all of you. 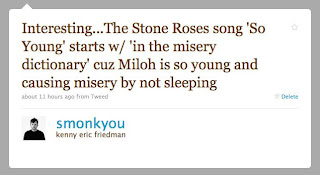 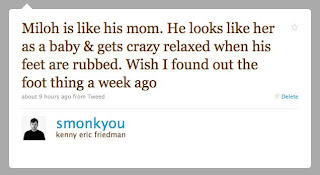 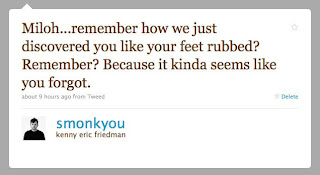 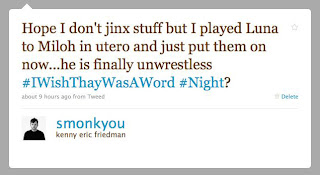 I should probably mention that all those tweets came in the moments that Miloh actually slept, I wasn't ignoring him while he fussed and cried.

Next I should say that The Happiest Baby on the Block DVD is total bullshit...you may remember that I did a post about it in which I swaddled my cat. While the method is great, the 5 'S's do calm Miloh, the actual DVD is what I think is misleading.

Here's why I hate it...for some reason when I watched it I was completly mesmorized at how Dr. Karp calmed EVERY baby on the video...I wasn't thinking about the fact that they edited out any time a baby fussed. I also forgot about the fact that Karp is the expert at this...he has just a few more years practicing this than I do. But one of the most important things is, while he does show a couple babies being put down to sleep, they cut away fast...I don't blame them because of course they can't wait 5-10 minutes to show the baby is still calm.

With Miloh we might be able to calm him but once he is put to sleep he often goes nutso within 5 minutes.

However I did learn a couple things Friday night.

Miloh will stop crying if I stand up. I can sit and rock, or just hold him and he may fuss...but if I stand up and do the same he will often calm...and sometimes it's just me standing and not even moving.

I also got some info about Purple Crying from @mommyingaround on twitter. I'm wouldn't be able to do info about Purple Crying justice in this post so I really think you should check out the site if you have a newborn. But the gist is it's about the phase of life where babies cry the most. What's awesome about it is we haven't reached the peak (that's at about 2 months) and that it often lasts 3-5 months total.

It was great to read the info...but what I found really interesting is the section on soothing techniques. A lot of the info is things you hear already, feed baby, burp baby and swaddle baby etc. But there were two things in there that jumped out at me a little. Kiss the bottom of your baby's feet and smile at your baby.

I realize that each of these things can soothe the baby a bit...they like having their feet touched because they are so sensitive and the get calm when you smile. But the untrained psychologist in me wonders if these are really more about you.

I mean if I kiss Miloh's feet I get happy...I'm kissing a totally cute baby that I love. And it's been proven that if you're in a bad or stressed mood if you smile it will help turn your mood.

So what if these techniques work because your baby is getting your vibes? What if Miloh was all crazy this week in part because when he cried I was frustrated that i would get no sleep for work? Perhaps he started fussy but fed off my negative energy.

That could explain the whole thing with him sleeping when I turned on Luna...and as you can see from the tweets I got a good 2 hours of sleep out of him.

I originally played their album Bewitched

to him in the womb once or twice because it's music that I love but also stuff I think would soothe a baby. So when he slept I thought maybe he remembered it or he was just soothed by it, and maybe he was soothed.

But maybe it was that I was really calmed by the music. Perhaps he felt that calm and fed off of it.

So I'm going to try things a bit different. Instead of just trying to calm Miloh I'm going to make sure I am calmed...in hopes that he feels some of that and it helps him too.

UPDATE: Jill who writes the Baby Rabies blog sent me a link to a  similar post she wrote a while back. Check it out.