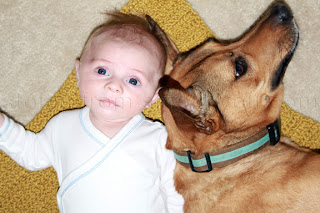 We were a bit aprehensive when we first brought Miloh home because we were unsure of ow our dog Kalli would handle a new arrival. She has always loved children, let them grab her tail, hug her and lean on her but you never know how dogs will react to a permanant member of the house.

We did have a plan to help the transition. When we went to the hospital to have Miloh we sent Kalli to the spa that she stays in...we didn't name it the spa that's what it's called. The day after Miloh was born we brought a blanket that he was swaddled in to the spa so Kalli could smell him.

Then we had him in the house a day before we brought her back.

The first day she came home she was mildly interested in Miloh but she was more interested in the bone we got her and the new toy she got. Day two she understood what was going on. Kalli would refuse to be in any room other than one Miloh was in.

We started off with Miloh in a Pack 'n Play

at the foot of our bed. But you know how things are and the next day it moved to Staci's side of the bed. The only problem is Kalli slept on the floor on that side...so we moved her to the floor on my side.

The first night she was fine but on the second night Kalli would not sleep on her bed. Instead she slept right next to the pack and play. But we realized she wasn't trying to get into her spot because that's not the area sh slept. She just wanted to be close to her new buddy.

As time passed she got more interested in him. When we first got Kalli she'd wiggle like crazy when we came home...but she expects it now and the wiggle is smaller. However if Miloh is away that crazy wiggle makes a return appearance when he comes back home.

She is so sweet with him licking his feet and face. She also hangs out by him when he poos, but that's for other reasons. When Miloh's doing tummy time Kalli is usually around. If he is wailing uncontrollably because we didn't get a bottle to him on time she'll come find us and give us a look.

She really cares for him and it makes us so happy. But we do realize there will be a time where she's no longer our dog but his instead. And when he's old enough she'll be sleeping in his room instead of ours...she already wants to make the switch.