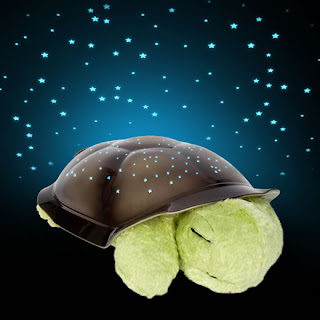 If you read my Random Shorts post a few days ago you may remember that we have a new routine that we've been doing to get Miloh to sleep. One of the things that we bought to help is this Twilight Turtle nightlight. I'm not even exaggerating when I say this is one of the best things ever...it's so cool and soothing that Staci and I want to get one for our room...

It's actually rather simple but so nice. It's a soft turtle with a hard plastic shell. On the shell are cutouts of constellations...so when you turn the lights on the constellations shine throughout the room. You can change the color of the lights to green, blue or amber. The green and blue are the brightest and it's reminiscent of those glow in the dark stars but a lot less hassle and a lot less permanant.

It's incredibly soothing and it shuts off in 45 minutes just as your baby (hopefully) falls asleep.

One thing I'm really digging is that 8 real constellations shine on your ceiling and walls...I think that will be cool for Miloh when he's older...it will be a learning tool.

and a  sea turtle,

which is even cuter than this turtle and which some of the money goes to a conservation charity. 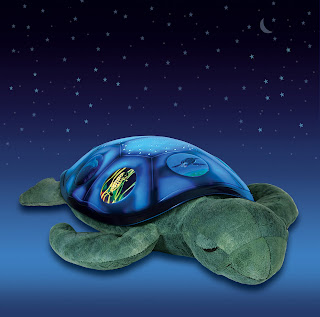