97 years in the making

June 13, 2010
He giggled more than I have ever seen before when he saw him...I'm talking about my grandfather. Miloh laughed too. A few weekends ago we went back to my hometown and our first stop was to see my grandfather, we'll call him Poppie for now on because that's what he's called. 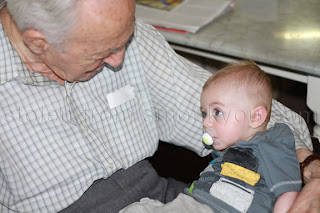 We chatted a bit and asked Poppie if he wanted us to wake Miloh so he could hold him, he said no...he didn't want to disturb Miloh. Not a minute later he said that now he was ready to hold Miloh.

It was fantastic...my grandfather was elated, I think he teared up a bit...weird thing is Miloh teared up for a second too. Then Miloh smiled when Poppie talked to him...he has such an amazing voice, really he should have done voiceovers, and Miloh loved it.

Once Miloh got a little squirmy Poppie put him down. He, my grandfather, continued to giggle until we left. 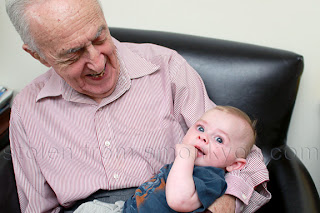 They saw each other 3 more times that trip...and we're going to record a video of Poppie reading a book so Miloh could have some of the same memories I do of his amazing reading voice.

The best part about it for me is if you read this older post you'll learn about how until I changed my last name to my grandfather's he was the last in the family with it...now it has continued 2 more generations than expected.

*I also won't mention that my mom cried the second she saw Miloh when she picked us up at the airport and saw Miloh again, or that she cried many times that weekend. And I certainly won't mention that I teared up a bit as we left Poppie's house the last day of our trip.