I will make you as famous as Neil Patrick Harris

This post was originally going to be an open letter but I decided to push that back a week to offer one lucky person fame beyond their wildest dreams.
You see I saw this thing called Twitchange...it's basically a tweet auction to help the folks in Haiti. You can bid on a retweet or a mention from a bunch of celebs, like Zach Levy, Jessica Alba, Demi Moore and more (hah). What's cool about it is the money is going to a good cause. And I guess if you want some exposure to a bunch of folks on twitter it's a good way to get that.
So I wondered how I could get in on this action.
Then I recall something I said to Jamie, The Baby Guy, whom I met last week. I said that I was going to make my first million from my fake retweets.
What's a fake retweet you ask? I'd say go to Urban Dictionary to find out but they rejected it. Seriously, they rejected it...have you seen that thing? It's filled with crap.
The now wildly famous Fake Retweet was born on a Friday when I was on the bus and was kind of bored. I thought I'd throw some star power behind some #FFs (Follow Fridays) of me. The first few I called out that they were fake, but that went away because, well that was just too boring.

Here are some of my faves, one is from Neil Patrick Harris and he's pretty hot right now. 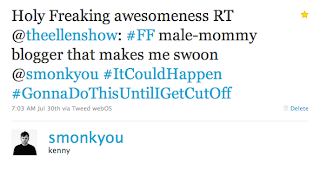 So I thought while you all could go to TwitChange...and maybe you should because it is a good cause...those tweets are probably out of your budget. Unless you want a mention from Nichelle Nichols which is currently going for $10.50.

Instead I'm offer you the opportunity to have me fake retweet you. Plus instead of having the money go to someone you don't know it will go to me. Or maybe I'll feel generous and buy something for Miloh (or Staci), yeah I realize that puts me in the same circle as Gandhi or Mother Theresa...I can handle it.

You can head to ebay to bid...and I know you want to. What I'll do is throw out not one, not two but three...yes three...fake retweets. They will all be different but will look something like this:


Oh, you're so sweet RT @yourtwitter name: I think People Magazine should name @smonkyou as sexiest man of the year

And if the bid goes over $25 (is there anyway it won't? I mean really I think we're looking at more like $2500) I'll throw in a smonk you T-shirt. The shirts were seen at the Blogher conference.

So don't delay...bid now. Please, don't everyone go to ebay at once...I don't want to shut it down.

Oh, and if you're still reading and not bored, you can head to Urban Dictionary and submit Fake Retweet...I'm sure their denial was just a mistake.