February 16, 2012
When I the idea for this First Gen Dad thing got in my head I thought it would just be some super light QA questions focusing on dudes who are stand up dads even though they didn't have a good influence... But as I started writing my QA I realized I needed to add a little background... These are questions I get asked every once in awhile from folks... I usually blow them off with short answers but in my post I decided to answer... And in Don's words "it got real".

So I really have to thank Don for being my first guinea pig after me.

Here's a little background on him from my POV... He's a dude I met on twitter and probably a guy I'd hang with if we lived in the same city... unless he thought I was an ass or such.

Don's a designer, one of the reasons he gets a plus in my mind, and a really good one at that... He's makes sweet little tattoo flash inspired shirts, design blogs (I'm talking sweet designs that I should probably hire him for except since I design sites it would be weird but it's hard to do your own stuff) and more... And he's got sweet tattoos.

But aside from that he's writes a super honest and humble blog about being a dad. I read few blogs... Like a really small number... But he's on that list and should be on yours. And of course he's a dad... to his daughter Adeline.

Really I have to thank him one last time because this is personal stuff and I'm honored that he was willing to share.

Oh, and I really quickly should announce a new thing–I'm trying to lose money on my blog. Most folks use them to make cash but the way I see it is if I can't make millions I should just make nothing (or at least $10 a year for the domain name). Therefore I see free ad space as negative cash. So find a link to his blog design thingy in my right sidebar.

That being said every month-ish I'm giving someone free ad space... Someone that designs something or such (totally committal with that description) And so Don get's it this month. It's a value of $1.17 a month.

And now his story:


Why wasn't your father around when you were growing up?
My Mom and Dad had me as a sort of "love child". My mothers parents didn't want my Mom to Date or see boys at her age (15), after 3 years of childhood love they decided to get pregnant on purpose so they would have to get married and have their strong love accepted. Looking back, I don't think they had any idea what the hell they were doing, and I know that when I was 18 I would have had no business getting married and having a child. After 7 or so years of a abusive marriage, my mom only decided to leave when the abuse turned from her to me. My memories of my Dad after divorce seem to entail him coming to get me for a visit and just killing time until I had to go back to my mom. I didn't really have a bad relationship with him, I'm not really positive if my Dad actually wanted a kid, or even understood what a relationship is between a Dad and child. 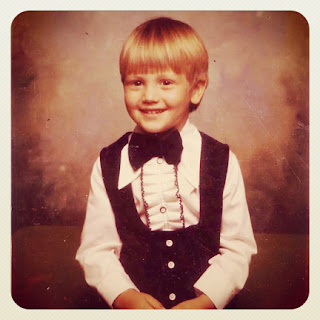 Do you have a relationship with him now? How is it?
Over the years I have seen my Dad in very spaced out, sporadic times. He seems like a very different person from what my Mom described to me. But, he definitely hasn't been involved in my life any time recently. I'm not sure when the last time I saw him was, but it was definitely years, he also has never seen my Daughter and that is something I really don't understand. I think that is part of who he is that I will never get.

Before you were a dad what did you look forward most about being a dad? What was your greatest fear?
My Mother and I were very close growing up and I have always felt like a male version of her when it comes to relationships. After my Mom was remarried she had 3 children that were much younger than I was, and I really enjoyed being around them as they grew. At times I almost felt like a parent to them. That experience actually made me look forward to the time that I had a child of my own. I had worried at times that I, like many people, was caught in a cycle of being a bad husband and a bad dad. I've never met my blood Grandfather because of a similar experience between him, my Grandmother and my Dad. I am thankful that much of who I am came from being around my Mom and a lack of a Father figure, I had to make up for it myself. I really think that a lot of my life experiences and path was a learning experience of me basically teaching myself about life and how relationships work. 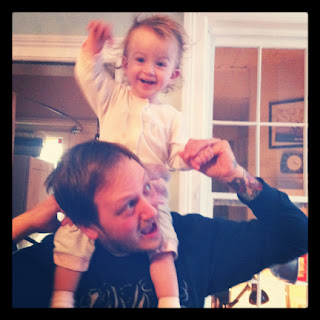 Are you the father you thought you'd become?
I'm not sure that i had a vision of the type of father that I would be, but I had envisioned myself being something that I would have liked. My Daughter is still very young, and I don't think that I can rate my own efforts. But I will say that since the first time that I felt her head as she was emerging to the world for the first time, I could feel the desire to give her the best Dad that I was capable of. The clichés were all true for me, and I realized it right then and there, I didn't realize what that love would feel like until it was there in our birthing pool in our living room resting on our chests. How has fatherhood changed you? • It's strange to try to explain this, but as much as the whole experience has changed me, I really feel like the same person I was 10 years ago. I guess now when I jump around like a moron or hit myself in the head with a ball, my daughter is there to laugh at me. 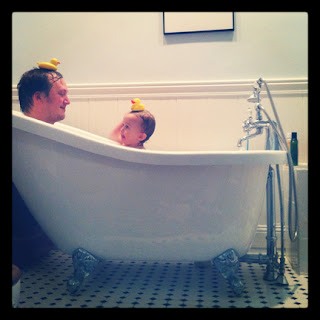 Is there anything you wish your father knew about you as a father?
I actually don't feel like I have anything to prove, my main thoughts on proving myself as a father are reserved for my Wife and my Daughter, they are the ones that really know if I'm doing it right. 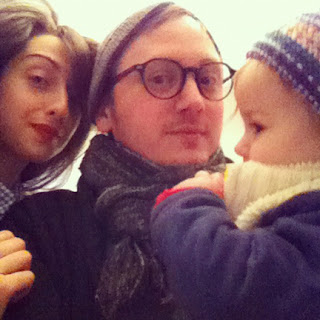 Any wisdom for new dads?
I've tried in the past to think of good advice to give to other dads that are newer to the game than I am, but I think that every experience is as unique as the person themselves. I will say that you can try to plan and envision what you would do in certain situations, but until the time actually faces you, you really don't know how you will handle it. My Daughter had a time when she had trouble going to the bathroom (we're talking number 2 here) and it turned out that the only time she could go comfortably was when she was in a nice warm bath with me. I didn't hesitate any time that I could see a discomfort that I became a pro at spotting… I would strip both of us down and hop in the tub and prepare to catch whatever came out. On paper in the past this may have seemed ridiculous, but that is my point, be prepared for things that will come up that you wouldn't envision… and be prepared to do some crazy shit.