The day the color stacking rings kicked my butt.

October 25, 2010
Here's a little quiz for the new dads, and new moms...what's wrong with the picture below? 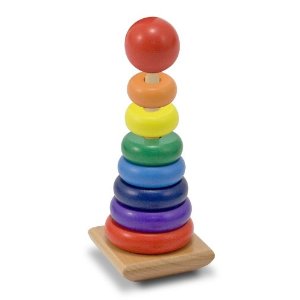 Do you see it?
While you could say things like "none of the rings are missing" or "there's no food, snot, spit up or poo on any of the rings" or even "there are no bite marks from our dog and/or kid" those aren't the answers I'm looking for.
I'm also not counting that they have an extra blue which they're considering indigo...that is wrong, because what the hell is it doing there anyway? I realize it's in the visual spectrum but I'm totally an old school primary, secondary and tertiary color guy. No indigo in those...so take it out of my color rings. Sorry for that but we have to stick up for our moral values.
To tell you the truth it took me months to figure it out.
See it yet? No, well I'll tell you...green is out of order. Yup, now that you see it you're probably realizing you were a fool.
It should go, blue, yellow, green then orange...at least that's what I was convinced of one night.

I must have puzzled over it for 5 minutes before I realized I was totally exhausted...then I felt like a complete idiot...nothing is wrong, green of course goes between blue and yellow...I just needed sleep.
So this is my little warning to the new dads (and moms) out there...there will come a time, when you think you finally have everything in control, when you're able to sleep like you did before baby, when you no longer have bags under your eyes, when you've gone 3 weeks in a row knowing the correct day of the week (but not necessarily date because that's just to hard) that you'll realize you're not immune to hitting a wall of total exhaustion and stupidity.
My exhaustion came from a weekend in Dubuque. It involved a 6 plus hour drive there, 2 nights of Miloh being not too happy about his new surroundings in which I had to basically lay on him each night until he slept before placing him in his pack and play. Followed by a 6 plus hour drive home. Oh, and there was a great wedding somewhere in between.
When we got back home, unpacked, fed and put Miloh to sleep I should have known I was exhausted. I shouldn't have done anything as dangerous as trying to put rings on a piece of wood.

I should have but I got cocky...I thought the worst was over...and I was wrong.