October 27, 2010
Here's another piece of wisdom learned from a tattoo...specifically one I saw on Fuck Yeah Tattoos. Really at the rate these wisdoms are going you should ignore every 3rd one and just check out the site because it seems to be where I get my stuff from.

As I said while checking out FYT I saw a photo of a woman's tattoo that said "Don't feed the bad wolf."

She explains that it comes from a Cherokee story that I think is pretty great.

An elderly Cherokee was teaching his grandchildren about life…

He said to them, “A fight is going on inside me, it is a terrible fight and it is between two wolves. One wolf is evil—he is fear, anger, envy, sorrow, regret, greed, arrogance, self-pity, guilt, resentment, inferiority, lies, false pride, competition, superiority, and ego.

This same fight is going on inside you, and inside every other person, too.”

They thought about it for a minute, and then one child asked his grandfather, “Which wolf will win, Grandfather?”

The Elder simply replied, “The one you feed.” 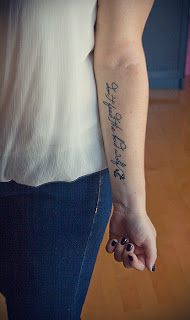