Gear Thursday: Ikea toys... and teaching your kids the life cycle of food.

June 16, 2011
As you all know without fail I bring you an awesome product review to you each and every Thursday.

A bit ago we went to Ikea to look at a bed for Miloh. He was digging the cots at school so we thought we'd move him to a super low toddle bed.

While we didn't find a bed for him we did find something... Including pure awesomeness.

First thing we found was The Baby Guy's sister, brother-in-law and nieces. I spotted them because I saw a couple wach of them holding blonde headed twins in the best baby carriers on the market. Any time you see a pair of blonde girl twins and the parents have the Maserati of baby carriers you know it's his family.

Sadly I didn't know if it would be stupid for me to ask if they were truly them so I didn't. I was worried that if they weren't them they'd think I was a creep, but I'd never see them again so I don't know why I'd care?

I got the text too late confirming that the were in fact them so Miloh lost his chance on meeting the two cuties. 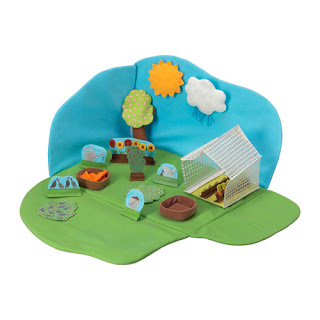 While there we also found a cool felt-ish Garden playset for him. It's called the Landet which I believe means "inside joke". You'll see why soon.

There was also farm in the Landet collection but it was big and not as colorful. So even though we didn't get the farm we got a farm animal set to hang on the garden and some extra animals.

They have four extra animals you can get by the piece... We only saw 3. So we grabbed a moose, a polar bear and a snake. When we checked out the moose was missing so I hoped Miloh had pocketed it because it looked cool and I didn't want to go back for it. Unfortunately he has better morals than me and did not steal it. 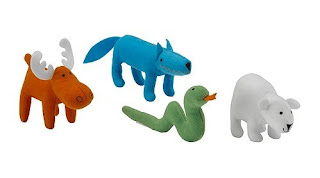 So, weird thing number one. Why is there a polar bear as an extra piece? A snake can live on a farm or garden, a wolf (the missing piece) can live on either as can a moose. But a polar bear?

My theory is it's in there because someone over at Ikea is a fan of Lost. Really there is no other explanation. 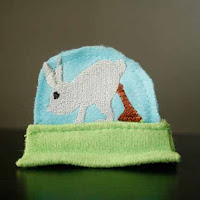 There can only be two explanations for this. Someone there is a fan of Pirates of the Caribbean and wanted to make a peg-legged pirate bunny. I think this is a fantastic theory but the brown part is too tall for a comfortable bunny peg-leg and I expect they would have caught that.

The other explanation if the bunny is pooing. This makes total sense. There are carrots and lettuce for the garden. After the bunny eats it's gotta poo (the cycle of food). 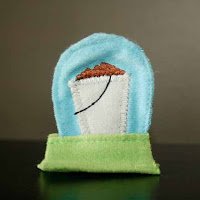 I decided the latter is what's going on... Especially because there is a bucket of manure that comes with the set. I can now teach Miloh that a bunny eats food, shits it out, and that poo is then mixed in the dirt so it helps the food grow better.

Moral of the story: Always wash vegetables before eating them.