August 09, 2011
Last week Lauren from With Two Cats asked me to guest post over at her blog for a day. I linked to it last week in my Behind The Tweet post... but wanted to include it here in case you missed it and because it seems like I'm writing a new post but in reality I'm not and in reality it doesn't matter.

Lauren sent me some suggestions of what to write and one was for me was to do A Day in the Life post. So I Googled "A Day in the Life" knowing that I'd get a lot of Beatles results. However on the first page was a blog post by Chris Brogan. In that post he writes "A day in the life post is obviously such a self-absorbed thing..."

I could add that it could be a potentially boring thing... So while it will most likely be the former I apologize if it's also the latter.

But because I ramble I should probably examine the Beatles song "A Day in the Life". There's that lyric


Woke up, fell out of bed,
Dragged a comb across my head
Found my way downstairs and drank a cup,
And looking up I noticed I was late.
Found my coat and grabbed my hat
Made the bus in second splat
Found my way upstairs and had a smoke,
and Somebody spoke and I went into a dream


Those actually speak to my life before child. I would in fact wake up and roll out of bed. I wouldn't drag a comb across my head... In fact I can't remember the last comb I've owned. I do pretty much nothing except maybe put a tiny bit of product in my hair... But the point is I'm downstairs quickly. And now's where I should mention I shower at night. Some people think that's dirtier than showering in the day... I think it's easier and more time efficient... Plus I don't sleep in a pile of dirt so I wake up relatively clean.

Then I'd grab a cup. I use a Keurig machine. I'm a bit of a coffee snob, but a quirky one. I hate drip coffee... It makes me sleepy. But Keurigs go through almost espresso fast so it's better to me. I'd love an espresso machine but those $150 or less ones suck. If I got one I'd have to throw down $1000 or more and that won't happen. I'm a fan of the stove top ones but really this isn't a post about my coffee thoughts.

Then I'd notice I was late and I'd grab my coat, but not my hat... I have a hat but don't know when to wear it. And I would make the bus in second flat... Often running down the street saying "Oh golly, Oh golly, Oh golly". In reality I wouldn't be saying Oh golly but Lauren asked me to keep this PG.

Then the rest loses me... I never smoked so then similarities end there.

But that was pre-baby... Now here's my Day in the Life.

I chose today... Yesterday would have been a better one to write about because my son Miloh got ear tubes in the morning and at night I had a guys night with a bunch of great creative folks... Plus I watched Tangled and seemed to like it more than my son... But you won't hear that story.

Here goes:
I woke up at 5:30 am... That means I got sleep and a half hours of sleep which followed my six hours of sleep the night before. It was my time to take care of Miloh in the morning but we're not supposed to go into his room until 6... Luckily he started playing in his room instead of crying.

We came downstairs and I made him breakfast. And made myself a cup. Hint for Keurig owners–brew extra bold cups on the smallest cup setting... Much stronger and I think better flavor.

And while eating breakfast we watched Sesame St. I seemed to enjoy that more than him too. It was the Brian Williams episode where everyone has "Mine-it-is". I only say that because Brian Williams rocks.

On the show there was a girl talking about her day in Paris where she lives. She says every day she goes to the farmer's market with her dad. That's how I knew this post would be boring... I do no such thing.

Then there was a scene where some man and his daughter (possibly) walk out of their house singing and playing a Mandolin and Banjo... Soon after two women walk by, one with a guitar and one with an accordion, and they join in the song. Next a guy with a stand-up bass walks buy and starts playing. Seriously this dude was just walking down the street with a stand-up bass not in a case. And finally a guy on who's riding his bike with a Djembe drum in his hand, shows up and plays.

And since it's so fun a bunch of neighborhood kids start dancing.

If this is other people's Day in The Life then really this post will be disappointing... I don't know how to play the Mandolin.

While I was wallowing in the reality of my relatively boring life Miloh grabbed the dog leash and wanted to go for a walk. I didn't want to take the dog out yet but told him to grab his dog (we walk them together most mornings). And so we walked his dog. 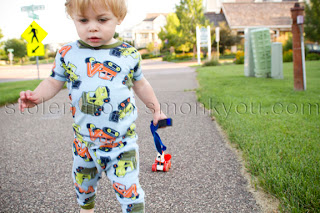 And I took photos because that's what I do. (Side note to Lauren's students... I used to be a professional photographer... You can make a good living doing that and other art.)

Then I was off duty so I got ready and headed out the door. I scooted to work because the weather was nice. Also because while I live in the suburbs riding my Stella Scooter makes me feel like I could be in a small European town. The scoot is short and on side streets and along a lake... It's a good start to a work day.

Then I find myself at work. I'm a creative director. That means I tell creative where to go... But since creative isn't sentient that's usually fruitless... So I do design and art direction with a good team of folks. Then I have conversations that go like this; Person A: Focus is the hardest part. Me: Actually waiting is the hardest part. Person A: That's what Tom wants you to believe. (The younger crowd won't get that reference.)

Every day there is different and I won't go into the details. I will say I'm working on a project that has me working with a client who's engineer that blows my mind every time we talk to him. Mostly because I'm a huge science geek in addition to being a creative type. But the moral here, again for the kids, is that you can have fun and do cool stuff with a career in art. I say this because while in high school I was told to go into art as a career I really didn't get that it could be a career... But it can. Also it saved me a bit because as you can tell I'm not friends with grammar.

After we head home, me on the scooter, Miloh and I head to the park. 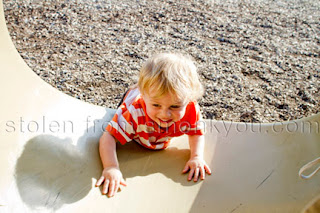 Here's the deal with parks... No one tells you what they are for. They aren't for kids to enjoy themselves and learn to socialize. Parks are for wearing kids out... Parents go with their kids so they climb all over in the hot sun and are easier to put to bed.

Like I said no one tells you this... And we only recently learned it. So you folks without kids are welcome.

Then we have bath, put the kid to sleep (again my day to do it) and I sit down and design some of my infographics (I'm working on the first year with a kid by the numbers and it's killing me) process some photos, open up gmail, write a bunch of run on sentences and send the email out with some of the aforementioned pics attached...

So while I'm not going to a French farmer's market every day or starting jam sessions outside my house I think my days are pretty good.