August 14, 2011
One thing I hate is people who use a ton of "big" words. It's not that I don't understand big words or anything it's just that I find that most people that throw them out often are either a) pompous assholes or b) people who want to make others feel inferior... Which I guess is really the same as 'a' but there's a difference...

Plus I talk informally, string words together that probably should be connected and make up words that have semblance of a real word.

However some big words do pop into my vocabulary with some frequency and Sisyphean is definitely one.

I like it because I was a fan of Greek mythology as a kid and the story of Sisyphus was a fave. If you don't know it the summary is Sisyphus pissed off Zeus so Zeues gave him the task of rolling a boulder up a hill. However every time the boulder comes close to the top Zeus has it roll back down.

And that's how things feel sometime... Especially when it comes to keeping the house in order.

Like the time that our cleaning lady had just left and I fed Miloh a simple dinner of rice and beans. This was a bit ago when he would wipe his hands across the table when he was done which would get food all over. And so not minutes after she left out kitchen looked like a tornado hit it.

And any time we fold clothes we need to put them away or Miloh runs up to them, pulls them down and throws them all over. Partly because it's fun... Partly because he then likes to shake the clothes out in order to help us refold them.

And then there are the mornings... Everything (well almost everything) is in order and just waiting to be strewn around the room.

Like the recent time when I went it was my day and I went to make Miloh breakfast... And I came in to the rock, once again, at the bottom of the hill. 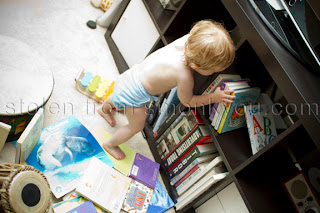 Also I should add the task of finding this photos was near Sisyphean as it was so not in the folder I would have expected it to be in and it took me an hour to find.

And there was the time he put blue tape on my jeans for about 40 minutes... I'd take it off and it would go back on... And so on and so on. 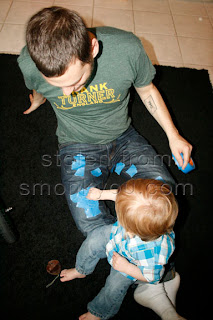