I took a photo Friday and/or Flashback Friday

July 23, 2010
When I was a kid my first bike was my sister's yellow bike. On the end of the handlebars was a spring that had streamers.

Since the bike was now mine I pulled the streamers of...then while sitting on the bike talking to a friend I somehow got the now naked spring caught in my eyelid. I couldn't move my head away from the bike until my friend got my dad who extricated the spring from my eye. I believe bikes with streamers no longer have that spring for some reason.

After a trip to the doctor I got an eyepatch, an action figure of Muffit from Battlestar Galactica and I think a new bike.

I think getting yourself in odd situations may be a dominant feature...yesterday Miloh somehow shackled himself to his car seat with one of his rubber teething rings...this is just another thing that makes me think Miloh has too much of getting into weird situations part of me in him... 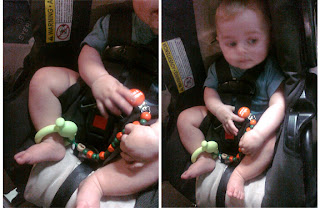