A bit over a month ago I was kind of bored and a little bit hungry. I wanted some sunflower seeds. And not just any sunflower seeds...I wanted Spitz dill flavor seeds because they freaking awesome...and better than their competitors.

Then I and idea came to me...what would be better than some seeds? The answer of course is a lot of free seeds...even though in reality it would cure the craving I had then.

So I sat down and wrote what I think was a funny open letter to Spitz asking them to sponsor my blog by giving me 50-100 packs of seeds. But Spitz is owned by Frito-Lay and they had no sense of humor...not that I was really expecting the seeds...but I was bummed by the total canned answer.

Writing the letter was fun...and I figured I could use my talent of writing funny, sarcastic, and semi-obnoxious letters for good. The good being showing my support for brands that folks may not be super familiar with.

That's how open letter number 2 became my letter to PF Flyers...which is hands down my favorite shoe company.

Again writing the letter was fun (read it because it's much better than this post) but since I got no seeds I expected no shoes.

Then the most magical thing in the world happened...I was contacted by someone who from one of PF Flyers marketing agencies...she said she could maybe get me a pair of shoes.

But wait...something even more magical happened. Elvis from PF Flyers found my post, left me a comment and offered me a pair of PF Flyers.

So that is FREAKING AWESOME. I'm rocking 2 new pairs of PF Flyers...a Ramble Lo and a Center Hi.

They didn't need to send them...but they did and I think that shows how cool of a company they are.

And they expected nothing in return. I don't need to review them (but they are sweet and if I did I'd say that besides being cool looking the insoles are so comfy that my f-ed up feet feel good in them...but I'm not reviewing them because reviews are hard work, I need to put them on a different site because of my ad network and really I got sick of doing them) link to them or any of that.

But I did make some promises in my letter and since they sent me goodies I'm keeping my promise. You'll notice in my sidebar that I'm calling them the semi-official footwear of my blog...semi-official because I don't want to freak their lawyers out. That logo link goes to their site...check them out...I did guarantee four page hits.

Also I have photos of Miloh eating the shoes.

But before I get to the pics I gotta tell you how different the photo shoots were. The first one (black shoes) was taken July 10. I put the shoes near Miloh and he instantly grabbed it then went into his mouth.

The second shoot, the white pair, was taken yesterday...and I couldn't get a shot. Miloh is so on the move it's crazy. He is kind of like one of the aliens from Alien. He moves fast, he moves silent and he's sneaky.

He's been interested in my camera for a while but now when it's out he army crawls over to it faster than anyone that's been through boot camp. So every time I put my camera to my eye he tried to grab it. 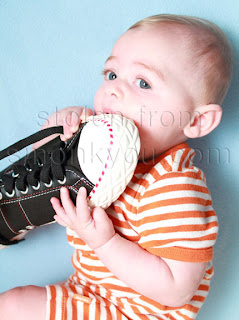 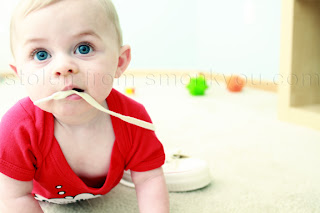 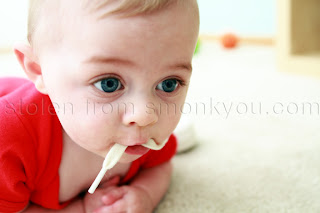 Oh...and don't fear that you've heard the last of the open letters...because I assure you there will be more.*

*not a guarantee...but I'm pretty sure